Easter is a rather low key holiday around here.  Church service is generally the highlight of the day (as it should be :)  But we have been at a loss to do afterward since we don't have any local family.  Last year we invited an older couple over for lunch, but their health is not as good this year so their daughter came up this year.  So we were quite pleased when Judy's sister Joni invited us to join them for their family dinner.

But first, Ruthie invited Grandma Judy over to our house to see the baby chickens. :) 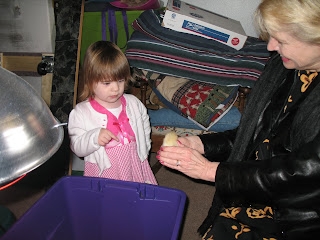 After the chickens we showed Ru that the Easter bunny had came and left her a basket of presents.  She got a new video, a Chutes and Ladders game, and some other misc goodies like sidewalk chalk and stickers. 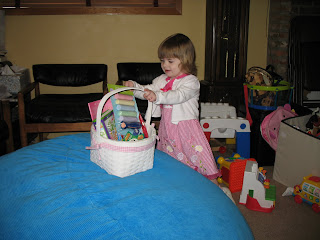 Ru and gma Judy posed for a quick pic before Judy left and we fed Ru lunch, and attempted (unsuccessfully) to get her to take a nap. 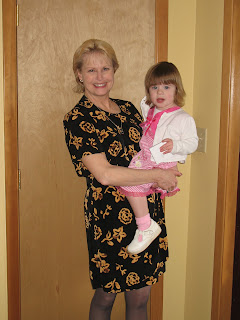 And so we headed off to the Ka'uhani's for Dinner. 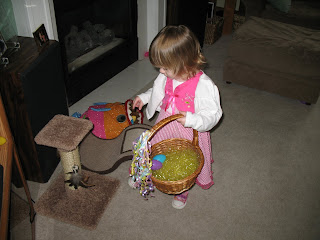 Joni's daughter Mahealani hid eggs for Ruthie, so she was able to have her own little Easter egg hunt.  She didn't look up at the camera for any of the pics, but at least we got a couple where you can see her cute little Easter dress.  She did NOT appriciate Joni's hubby Michael trying to play and stealing her eggs.  She was confused at first, then started crying.  She wouldn't even take them out of his hands when he tried to give them to her.  I guess she doesn't understand that sort of teasing yet, as she wanted nothing to do with the poor guy for the rest of the afternoon.  At least she recovered enough to get back to her egg hunt. 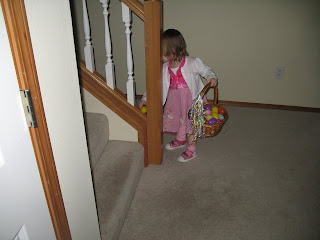 After playing with the eggs and chasing their kitty around, Ru was a good girl and ate dinner at the table with us.  After wards Judy put her down for a nap (she has some magical talent at getting Ru to nap) and we played a board game.  Teddy slept most of the time, and Mahaelani got some good practice handling a baby.  We had a great time, and look forward to next year as they've already said they'd love to make a tradition out of it! :)
Posted by JenO at 3:46 PM