Teddy turned 2 (months that is) the 7th, so Brian and I got out the camera and took some pics the following Sunday since she was wearing a dress for church.  Unfortunately they didn't turn out really well, as she had red eye SO bad it still looks a little funky after being corrected.  But it's not so bad I won't post some for you, along with one of big sister. (who did NOT want her pic taken with baby sister this time.) 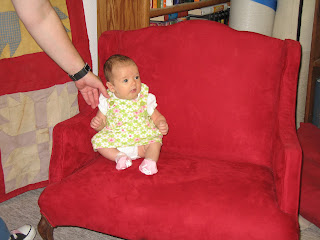 She was feeling feisty; I had a REALLY hard time getting one without my hand in there as she kept throwing her head around (and the rest of her followed of course)  Brian didn't manage to actually take a pic when she threw herself forward and I caught her her face with a rather audible smack! (didn't upset her tho, so it didn't hurt, just looked like it should have. :) 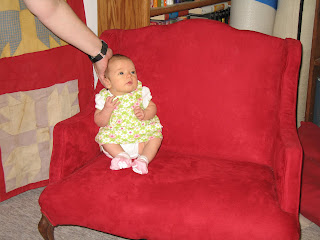 They don't look so bad zoomed out like this, it's when you click on them to size them up her eyes look oddly grey. 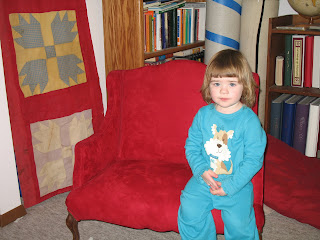 Ru's turned out really nice tho. Heh, I need to start making her sit on the other side so I can crop out the unused throw rugs hanging out behind the love seat.

I just had a nice little photo shoot with Teddy basking in the sunshine, so I should get another post or two out this week for sure.  (maybe even today, but I also may be overly optimistic there as I'm supposed to finish the chicken coop today with some help from John and his girlfriend Misty.  But they aren't here yet.... ;)
Posted by JenO at 10:28 AM